In the Dugout with Mia Marinakis 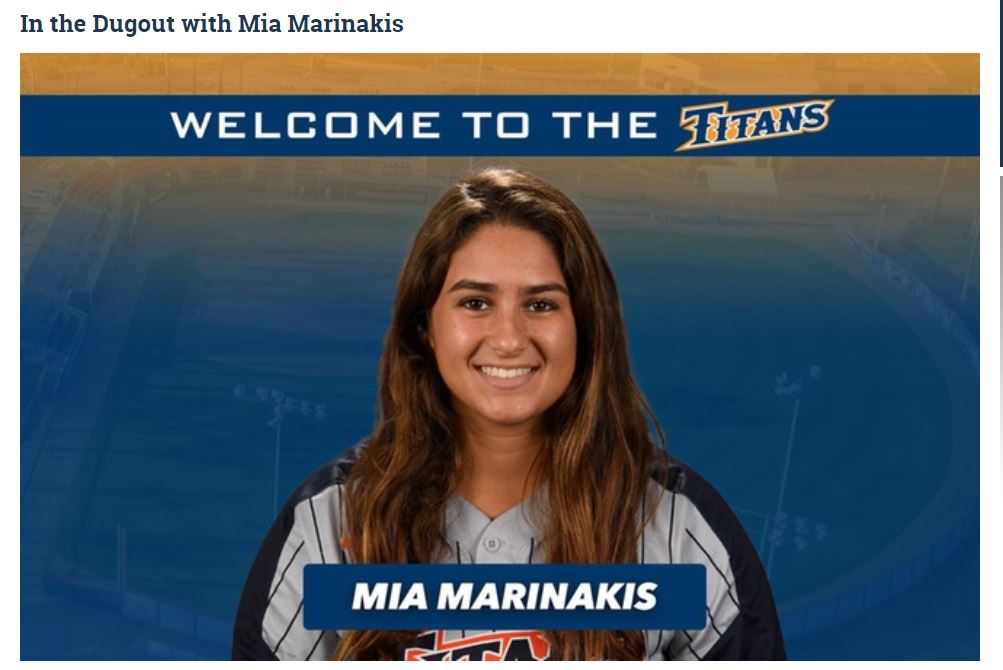 FULLERTON, Calif. – With fall workouts in full swing, Titans softball welcomes ten newcomers to the program and this series goes “in the dugout” with each of them to get to know who they are. Leading things off will be freshman pitcher, Mia Marinakis.

Marinakis is a 5’6″ right-hander from Chula Vista, California who comes to Fullerton after a fantastic high school career at Bonita Vista High. As a Baron, she was a four-year letter winner and a three-time All-League First Team selection. She earned All-CIF Second Team honors in both her junior and senior seasons as well as being named team MVP in her freshman and senior seasons. She also helped her team take home a league championship in 2018.

On Friday, Marinakis will be heading overseas for a week to play with the Greek National Team as they take part in the ESF Super 6 Tournament, which features the top six teams in Europe. The tournament will take place September 18-22 in Hoofddorp, Netherlands. She also played with Greece earlier this summer in the U22 European Championship in Trnava, Slovakia in late July. Marinakis is now the sixth Titan to play international ball in the last three years.

“What an honor for Mia to represent us on the international level,” said head coach Kelly Ford. “She is a force on the field. She is working hard with Coach Dallas and we have already seen progress in the circle. We’re also excited to see the power she has at the plate in our lineup.”

Mia is the daughter of Kostas and Katina Marinakis and has an older sister, Vicky. She will be majoring in Kinesiology. When asked why she chose to be a Titan, she said “I really love the atmosphere the coaches have here and how open it is. They truly care about us both on and off the field.” Marinakis is excited to start competing at the collegiate level as well as growing as not only an athlete but as a person.

The Titans will be back on the field for the start of their fall schedule at Anderson Family Field on October 19 against Concordia University. Game time is scheduled for 6:30 p.m.